On Tuesday, August 2, families, friends, and firefighters gathered to pay their final respects to Captain Jeffrey Bowen. He lost his life while battling a four-alarm fire last Thursday at a downtown medical office building.  He left behind a wife and three kids.  The service was held at Biltmore Baptist Church where approx. 2,700 people gathered to remember this fallen hero.  After Chief Burnette presented Bowen's helmet to his family a final call was broadcast over all radios signifying a firefighter has gone home.  Captain Bowen was carried on Engine 1 while being followed by Rescue 3.  He was taken by his firehouse one last time before being laid to rest.  RFB-Asheville FD. 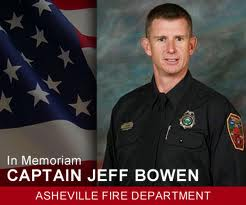 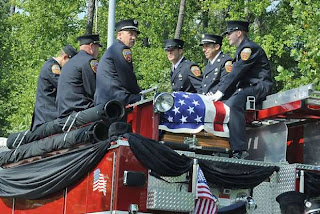