Two Toledo firefighters were killed on Sunday while battling an apartment complex fire in North Toledo — the city’s first firefighter fatalities from an active blaze since 1981.

Stephen A. Machcinski, 42, and James Dickman, 31, died of injuries sustained while fighting a fire at 528 Magnolia St.

Private Machcinski had more than 15 years of service. Private Dickman was appointed to the department in September. His fire class of 51 recruits, sworn in on Sept. 3, has not yet had its graduation ceremony.

Private Machcinski had been with the Department since 1998, serving with Engine 13 and Engine 3. Private Dickman was appointed to the department in September 2013, and had previously served with the Sandusky Perkins Fire Department. 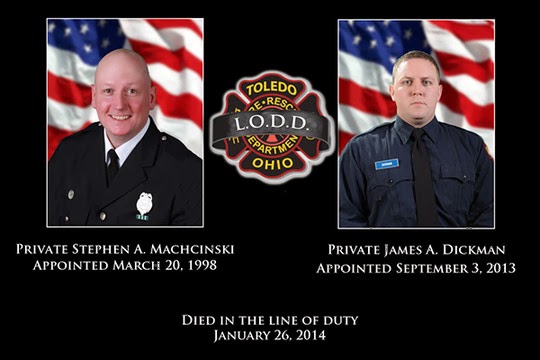